Home » Gardening » Cotoneaster: How to Plant, Grow, and Care Cotoneaster? 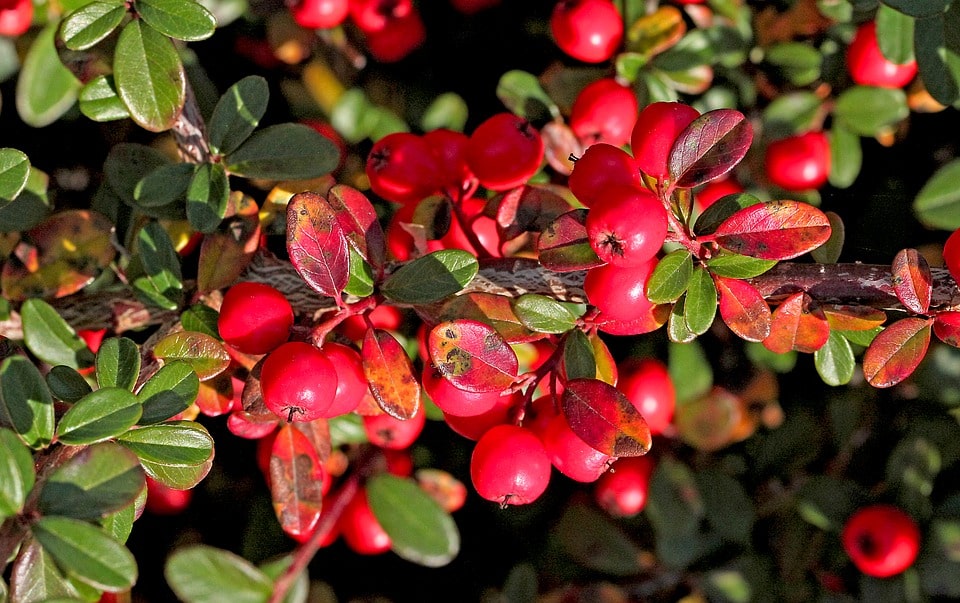 Cotoneasters are low growing landscape plants that have colorful shrubs and beautiful small, pink, or white flowers that allure hummingbirds and bees. These flowers are followed by bright red or orange berries. The berries are favored by birds who come to feed on it during the fall and winter.

Cotoneaster has several uses in the garden. Some of the common types of cotoneaster are listed below: 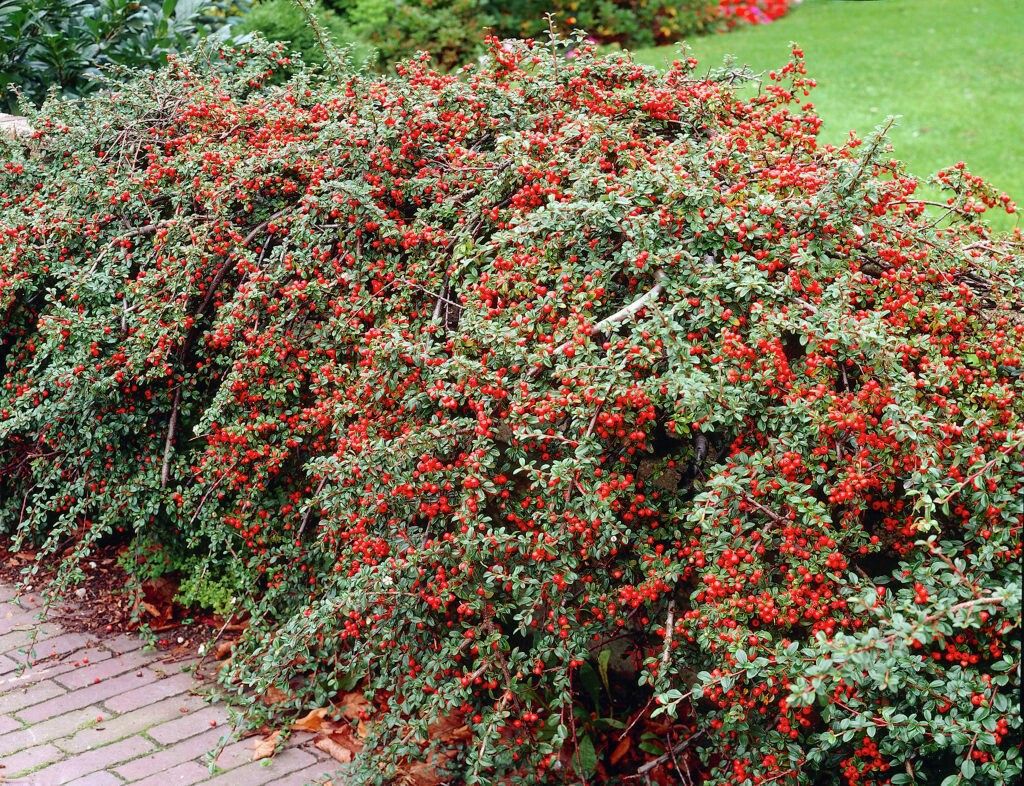 These are low-growing, deciduous shrubs that grow 2 to 3 feet tall and can spread up to 8 feet. Its dark green foliage turns into reddish-purple in the fall and produces bright red berries that last throughout the winter season. Cranberry cotoneasters are good groundcover plants that are excellent for erosion control, especially on slopes. These shrubs can thrive in moist, well-drained soil, and can tolerate partial shade. 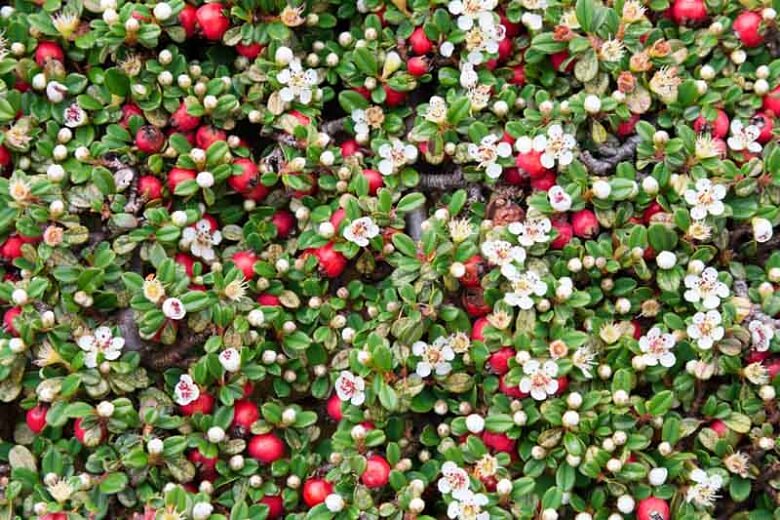 These are another type of low-growing plant that makes a good ground cover. They have small white flowers that bloom in the spring and produce bright red berries in late summer. Bearberry Cotoneasters can grow 3 to 12 feet tall and can spread up to 10 feet. These shrubs can thrive in dry to medium moisture, well-drained soil, and can tolerate partial shade. 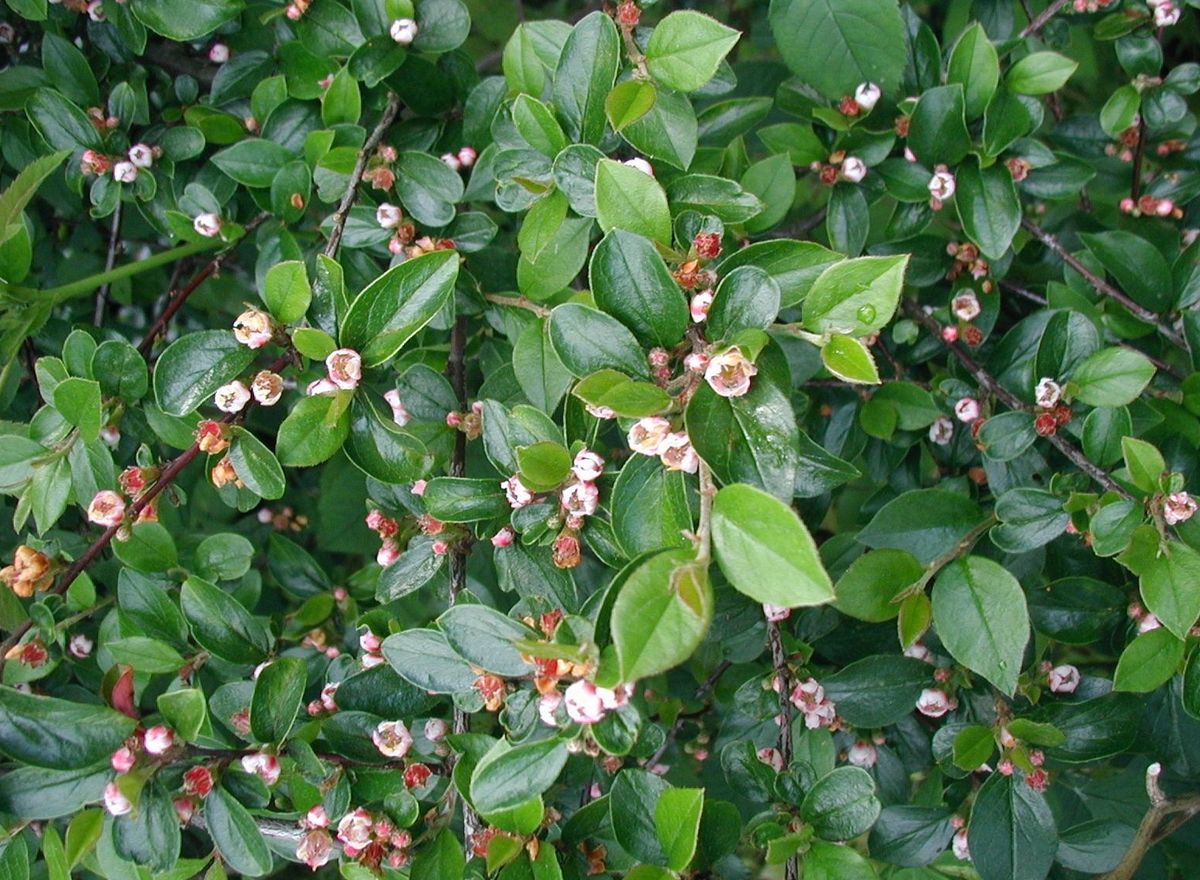 These are erect, deciduous, rounded shrubs that grow 5 to 6 feet tall and can spread up to 12 feet. It produces red berries that last till mid-autumn and is followed by white summer flowers.  Spreading Cotoneasters have glossy dark green leaves that turns orange and red in the fall. These shrubs can thrive well in moist acidic soil and can tolerate full to partial shade. 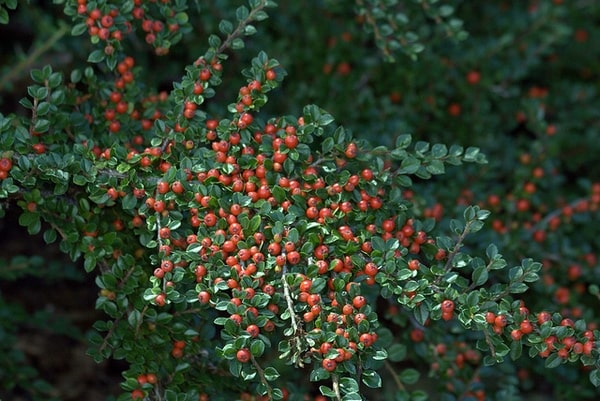 These are spreading, deciduous plants that grow 2 to 3 feet tall, and can spread up to 8 feet. Its flat branches have small glossy green leaves that are laid out in a distinctive herringbone pattern. Rockspray Cotoneasters produces solitary pink-tinged white flowers in late spring that are followed by scarlet berries, which lasts till late summer. These plants can thrive well in medium moisture, well-drained soils and can tolerate full to partial shade. They are ideal for hedging and screens, or for cascading over walls. 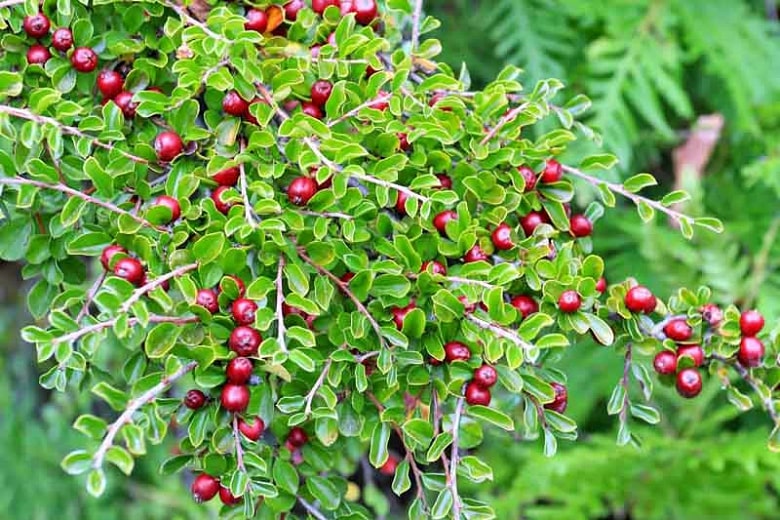 These are deciduous, mounding plants that grow 12 to 18 feet tall but can only spread up to 6 feet. Creeping Cotoneasters has stiff branches that are bespangled with rounded, wavy-edge, dark green leaves. These shrubs produce small, white flowers tinged with pink in late spring. The flowers are followed by bright red berries that can last until winter. These plants can thrive well in dry to medium moisture, well-drained soils and can tolerate full to partial shade. They are ideal for banks and slopes, and rock gardens.

The Queen of Carpets (Cotoneaster Procumbens) 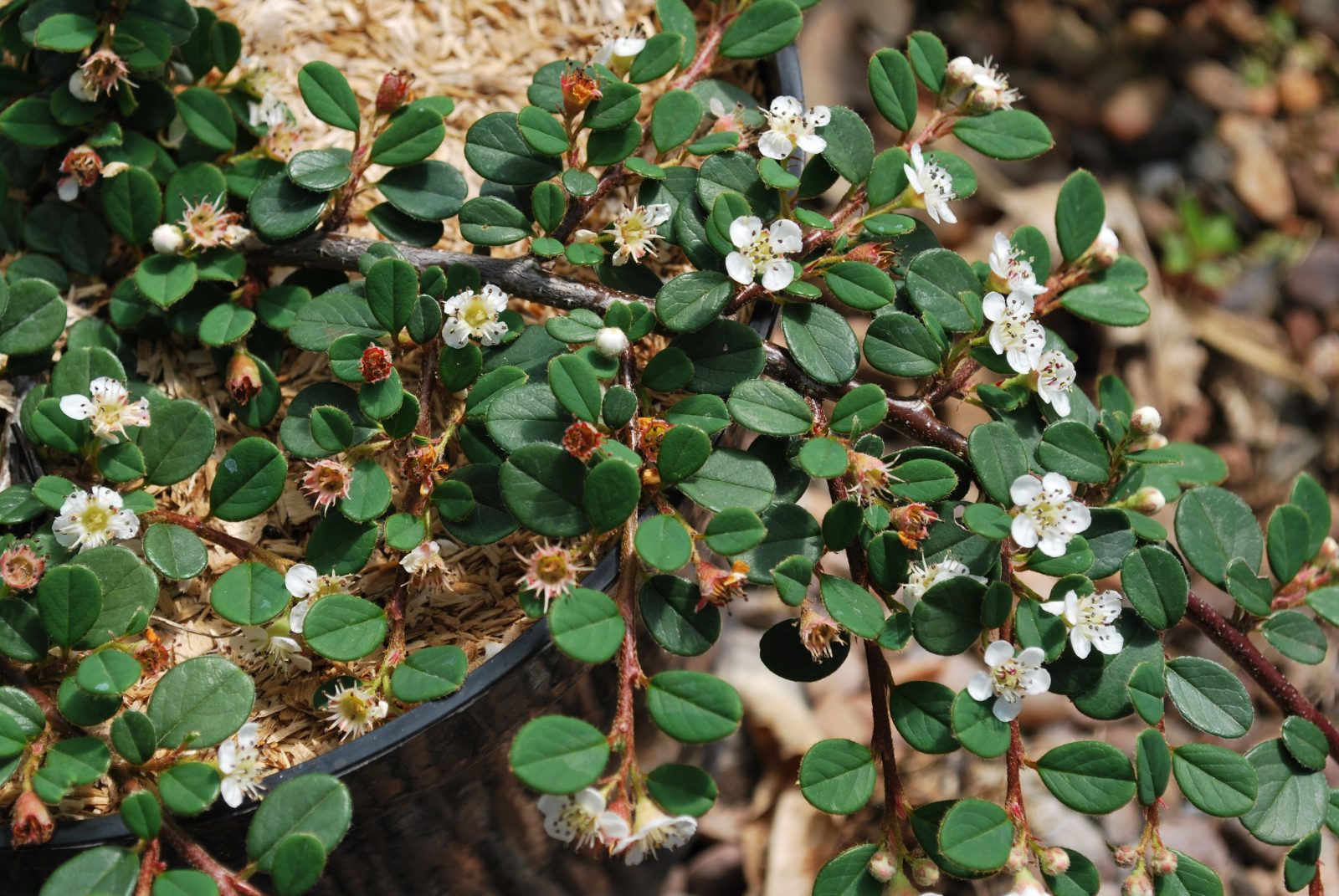 These are densely carpeting prostrate evergreen shrubs that grow 4 to 6 feet tall and can spread up to 6 feet. Queen of Carpets produces small white flowers in early summer that are followed by bright red berries, which lasts till autumn. These plants can thrive in well-drained soils and can tolerate semi-shade. 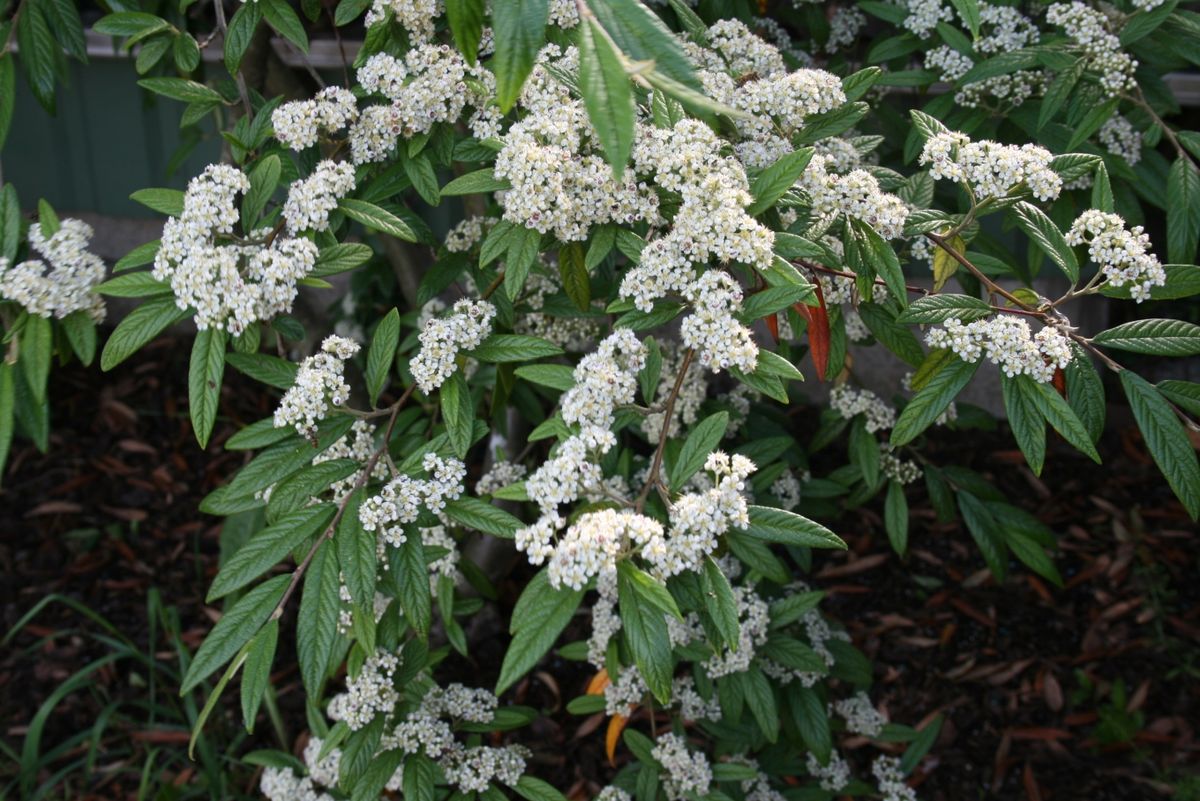 These are evergreen, spreading shrubs that have arching branches and glossy, dark green leaves. The leaves generally last throughout winter and might turn into a red color if the weather becomes very cold. Willow Leaf Cotoneasters are lower-growing plants (3 to 4 feet) but can spread up to 15 feet. During summer, these shrubs produce clusters of white flowers that are followed by red berries, which last till winter. These plants can thrive in moderately fertile, well-drained soils and can tolerate full to partial shade. Willow Leaf Cotoneasters are easy to grow and can be planted in coastal or cottage gardens. 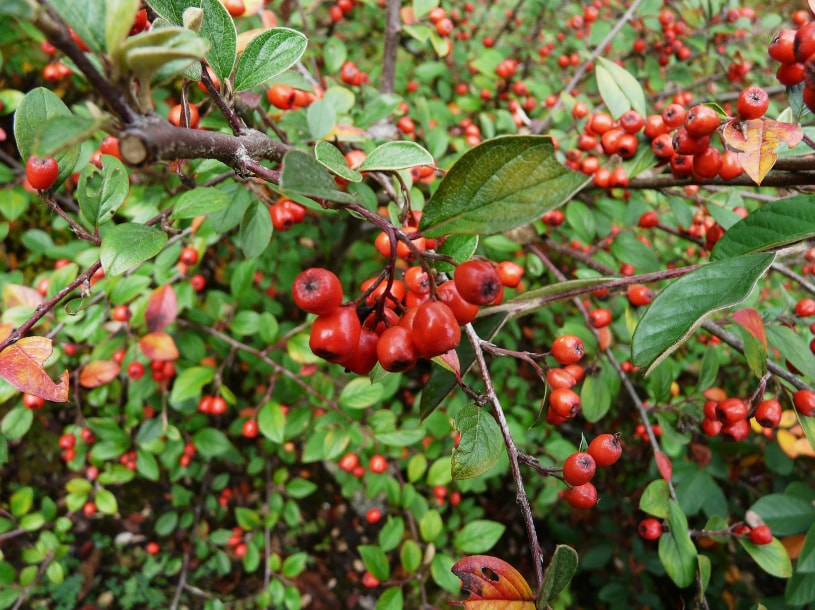 Franchet’s Cotoneaster can be either deciduous or evergreen shrubs that have deeply veined grayish-green leaves. These shrubs can grow up to 6 to 8 feet tall and wide. Franchet’s Cotoneasters produces clusters of pink and white flowers in late spring and summer. These flowers are followed by red and purple berries that last until winter. They can thrive in well-drained but somewhat dry soil and can tolerate partial shade. 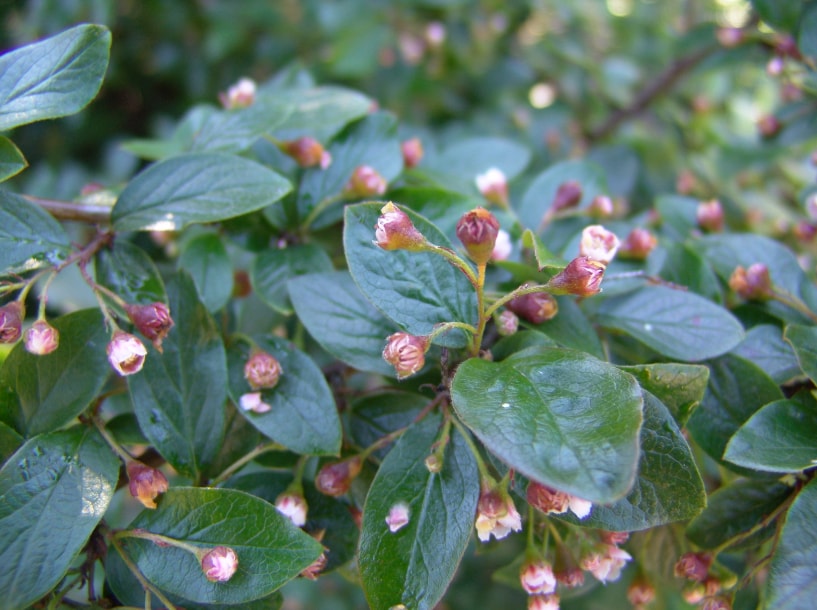 These are rounded deciduous shrubs with spreading branches that have glossy dark green leaves. These shrubs can grow up to 6 to 10 feet tall and wide. In late spring to early summer, Hedge Cotoneasters produces small pinkish-white flowers. They are followed by rounded, blackberries that last until winter. They can thrive in well-drained but somewhat dry soil and can tolerate full to partial shade.

Items required to plant a Cotoneaster

Cotoneaster grows best in full sun, but can also tolerate partial shade. It can handle difficult circumstances, including poor soil. To get the best results, plant a cotoneaster shrub in moderately fertile, well-drained soil. They are adaptable to any kind of soil from sandy to clay, as long as it is not too wet.

Cotoneasters planted in the full sun develop dense branches, deep green foliage, and a lot of flowers and berries. Although this plant won’t be that good when planted in partial shade, it will still be able to produce flowers and fruits.

Follow the steps below to learn how you should plant a cotoneaster shrub.

Cotoneaster plants can be propagated with softwood cuttings in the month of summer. It is a plant that can be easily multiplied by preparing cuttings. Although preparing cuttings is a little hard, it is still one of the best ways to propagate this shrub. Before starting this, get hold of rooting hormones since it will enhance your opportunities for success.

Birds are the biggest propagators of cotoneaster plants since they spread the seeds of the berries they have eaten. Once the berries become soft and mushy, the birds will no longer eat them and it will ultimately fall to the ground where they will start growing. These seedlings can be transplanted easily once they have grown a foot tall.

Pruning and caring for Cotoneaster Plants

It is very easy to take care of cotoneaster plants as its requirements are very limited. Regular pruning helps keeps the cotoneaster plants dense, assures beautiful flowers, and thick foliage. Mainly, cotoneasters require light pruning to get rid of wayward branches or to control any disease. While pruning cotoneaster plants, only cut out selected branches to the base rather than re-shaping or shortening them.

Evergreen cotoneasters should be pruned in the month of spring so that you can shape and balance the shrub as per your preferences. Deciduous cotoneasters must be pruned during the fall to remove dead leaves and berries. Ground cover kinds of cotoneasters must be pruned only to remove dead and damaged branches. You can prune the low growing shrubs by removing some of the oldest branches in the month of spring. Medium and tall-growing cotoneaster plants look perfect when they are left un-pruned since in this way they can maintain their natural shape.

It is important to water cotoneasters frequently during the first season so that it can develop extensive, deep roots. Cotoneaster only needs water in case of strong heat. Hence, it is advised to water cotoneaster plants during the month of summer, particularly when it’s been days since the last rainfall. Potted cotoneaster requires a lot of water, and so you should water these plants as soon as you see that the surface soil has dried off.

Diseases and parasites that affect cotoneaster plants, and how to fight them

Cotoneasters plants are quite resistant in the face of several diseases, but can, unfortunately, fall victim to fire blight. If the fire blight is a contagious disease, and if it happens to a cotoneaster plant then its chances of survival will be very low. These plants are also prone to attacks from parasites aphids and scale insects.

Use fungicides to control diseases like fire blight. Spray plants with dormant oil and lime sulfur to eliminate scale insects. You can also slow the spread of scale insects or mealybugs with a powerful blast of water. It is advised to plant aphid-trapping plants like nasturtiums or aphid repellents like French marigold to naturally regulate aphid populations.

Cotoneaster is a very attractive plant and is particularly acknowledged for its berries. Maintenance of cotoneaster plants, from planting to pruning is very easy. So what are you waiting for? Follow the steps above and plant a cotoneaster plant soon! 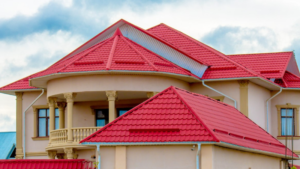 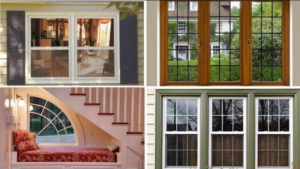 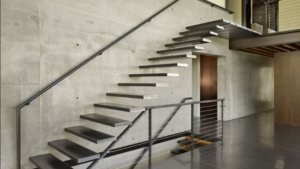 One thought on “Cotoneaster: How to Plant, Grow, and Care Cotoneaster?”